The Swansea-educated director of the Large Hadron Collider project in Geneva has become one of the most identifiable Welsh scientists of his day, writes Rhys David 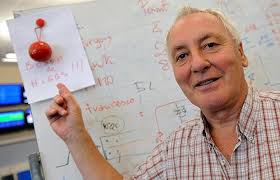 Wales has produced a number of outstanding scientists over recent years, many going on to achieve the prestige of a Fellowship of the Royal Society, but one above all others has achieved a public prominence in recent years.

When the £6bn Large Hadron Collider (LHC) at the Cern international physics laboratory in Geneva was switched on in the autumn of 2008, the unmistakeable Aberdare tones of its director, Dr Lyn Evans, were heard around the world announcing the start of the world’s biggest scientific experiment. Over the next few years it is set to answer some of the most fundamental questions about the nature of the universe (or the multiverse, if the theory of multiple universes is correct).

Nearly two years later Dr. Evans, who has spent most of  his life at Cern, has retired. The project has not resulted in a meltdown of planet Earth as some scientists forewarned, it has survived an embarrassing months long shutdown nine days after it was turned on when a short circuit blew a hole in the 17 mile long, five mile diameter vacuum pipe buried up to 600 ft. underground, and is now running at high power and turning out an estimated 100,000 DVDs worth of data a year.

For Dr Evans the project represents the crowning achievement of a career which started in the science laboratories at Aberdare Grammar School in the 1950s. The teaching of science there was good, he recalls, and the teachers were highly respected. “The school offered a level of education you would only get nowadays in public schools,” Dr Evans believes.

University College, Swansea, where he did his first degree and a Ph.D. in plasma physics cultivated his interest in a scientific career. The college was an early collaborator with Cern among British universities, sending a stream of talented graduates and post-grads to Geneva starting with the late Eifionydd Jones to co-operate on experiments there. Indeed, Swansea scientists have played a big role Cern experiments into anti-matter, one of the constituent elements in the universe.

The LHC has been built to send two simultaneous accelerated beams of hydrogen nuclei in opposite directions around the collider and these are then directed by magnets to crash into each other. The resultant explosions recreate conditions a pica second – one hundredth of a billionth of a second to be precise – after earth’s creation 13.5bn years ago. The debris from these can then be analysed. Optical systems – high powered telescopes and the like – can by contrast only take us back 1bn years, Dr. Evans points out.

The outcome is not going to be a sudden “find” in the middle of all this activity – instead the scientists at Cern will be looking through all those DVDs worth of data for statistical patterns that current physics knowledge cannot explain. The prize that has been most publicly identified is the Higgs Boson, which Dr Evans believes could take two years to recognise. At present scientists only really understand atoms which account for roughly 4 per cent of matter, with dark energy (73 per cent) and dark matter (25 per cent) still a mystery. The Higgs Boson, if and when it is proved to exist, could explain how matter acquires mass. Another important scientific theory the LHC could help to verify is supersymmetry, the idea that for every fundamental particle a far heavier super particle can exist. This is the main candidate to make up most of dark matter.

Though no longer officially in charge, Dr Evans has continued to live near Cern and to take part in two important research exercises there, but he has also found more time to involve himself in educational activities. A visiting professor at Imperial College, London, he is passionate about getting more young people interested in science as a career. Nor is this lack of interest just a British problem, he notes. In Europe generally, he notes, the number of young people interested in science is going down. “Europe needs more scientifically trained people or it will be in trouble in 20 years’ time. Not everyone can be a research scientist but modern industry needs scientifically educated people. This applies particularly in Wales because we have to attract high technology industries.”

Visits to India and a  number of other developing countries have convinced him the level of education is increasingly very high. Wales, too, he argues must have a highly educated population. In this respect the Welsh Government’s recognition of the importance of scientific education and its appointment of a science adviser are seen by Dr Evans as important steps, for which he argues Rhodri Morgan, former First Minister, deserves credit.

Much of his work now is with young people, including schools in Wales. He is involved in a big educational project in Bangor this June and through video-conferencing (where he says Welsh schools are well-equipped) he has been able to talk to as many as 30 schools at a time. Much of his focus is on how to motivate teachers, whom he sees as the key to encouraging in pupils a love of science. Another educational project will explore the frontiers between physics and biology.

Cern itself is an expensive operation and Britain, one of the founder members, contributes 12-13 per cent of the annual running costs of roughly £1bn. Can this be justified when cuts are being made across virtually all areas of Government spending? Dr Evans is, understandably, in no doubt. There have firstly been important spin-offs, including medical advances. The University Hospital of Wales in Cardiff is one of a number of hospitals worldwide that has a Positron Emission Tomography scanner (costing £16m) that arose from Cern’s work. It  enables doctors to see regions of high metabolic activity in the body, helping to establish the malignity or otherwise of tumours. Cern, which was crucial to the original development of the world wide web is also behind a more advanced grid for sharing data.

Beyond these direct benefits there is a wider educational role. Cern has 2,300 staff, 783 fellows and 9,534 users – young people, mainly post doctoral students, learning to work at the frontiers of knowledge. Not all of them end up in particle physics but take up other high-powered careers where the analytical skills they have honed at Cern can be put to good use. Cern itself shares its results with collaborating institutions around the world, which help to analyse the data.  “It is becoming much more difficult to prise out the last secrets of nature. This is why we have to co-operate,” he notes.

This ability to co-operate would seem to be a British – and Welsh – quality and to have helped the UK play a leading role in Cern. “That is one of my attributes – I have been good at getting people to work together,” Dr Evans confides. It is an ability he hopes he can now bring to getting science back to a stronger place in British education.